Alberta Jr Curling Teams at the O.I. U18 Curling Championships 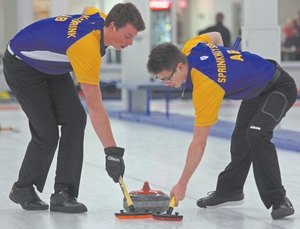 A pair of Okotokians slid its way into international acclaim with a podium finish at the world’s marquee Juvenile curling event.
Team Alberta, featuring Okotoks’ Kyler Kleibrink and Christian Sprinkhuysen, brought home the bronze medal at the Optimist International U18 Curling Championships, March 31 in Surrey/Langley B.C.
“I’m very impressed with how we did and it feels really great to have the bronze medal actually,” said Sprinkhuysen, the team’s lead. “I’d say there’s no other experience like it.”
The Alberta curlers had a dream start to the event by picking up three straight victories over Pennsylvania, Prince Edward Island and Minnesota to take a stranglehold on playoff positioning in Pool B.
“We won our first game and momentum kept building up and we won our next game, then our next game,” Sprinkhuysen said. “We were feeling really great.”
Team Alberta, composed of Nanton-skip Jeremy Harty, Kleibrink at third, Brooks’ Jeremy Burnett at second and Sprinkhuysen at lead, hit its first road-block in a 7-6 loss in an extra end to Ontario on March 30.
“In the extra end both teams were playing well and it just came down to the final couple shots,” Kleibrink said. “We were just off by an inch so they won the game.”
They would recover from the opening loss quickly, picking up a convincing 6-0 win over Quebec in the round-robin finale.
With a record of 4-1, Team Alberta advanced to a semifinal showdown with Manitoba, an undefeated rink heading into the contest and eventual gold medalists.
Manitoba grabbed an early 5-0 lead through three ends, and despite a valiant comeback the Alberta curlers simply ran out of rocks and lost 7-4.
“We were looking at a lot of yellows, but we had a shot and we played it, but the rock picked,” Kleibrink said of the crucial three-point third end for Manitoba. “When it picked we tapped them in for three and after they got up on us they were a great hitting team and we didn’t have a chance of coming back.”
A chance at redemption came in the form of a bronze medal game draw against Team Japan, where the Alberta curlers edged their opponents by the narrowest of margins in a 4-3 thriller.
“We pulled our socks together and really came out strong in the bronze medal game,” Kleibrink said. “Japan they were amazing (at draws) so we just had to keep them hitting.”
The bronze medal from the 12-team tournament was not a bad way to cap off a Juvenile career for the curling foursome, who will now move up to the Junior ranks.
“It was awesome,” Kleibrink said. “Most of all though, it didn’t really matter where we placed. It was just a great experience for all of us.”
Posted by George Lewko at 7:30 PM