Governor Glen Kreller (St. Albert) is pleased to announce the following appointments to the District Team for  2013-14.

There are some changes that we have introduced into the team this year that includes the splitting North-East Montana clubs from Zone 8 to form a new Zone 10.  The Essay & Oratorical Competition Chair positions have been combined and the Lt Governor for Zone 5 will also chair the CCDHH competition.  I want to thank all those Optimists who stepped forward to volunteer with the District Team in addition to their club duties.

The District Executive Team is responsible for running an effective District that fosters growth in membership and clubs, delivers fantastic youth projects and programs, and delivers services that support the Zone Lieutenant-Governors, and Clubs.  We are pleased to introduce the District Executive for 2013-14: 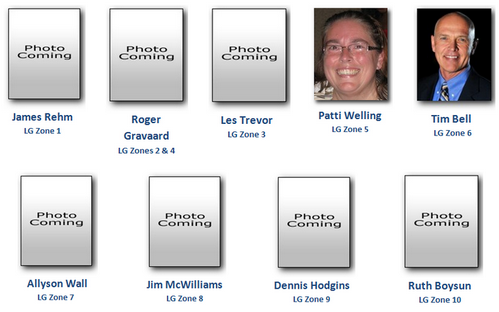 The District Growth Team is responsible for fostering a significant growth in District membership by assisting fellow Optimists to recruit new members and build new adult and JOOI clubs, and by enhancing the knowledge and skills of Optimist leaders and members.  We are pleased to introduce the District Growth Team for 2013-14:

The District Youth Programs Team is responsible for running the District Scholarship Contests, and supporting clubs with running other OI sanctioned youth programs.  We are pleased to introduce the District Growth Team for 2013-14: