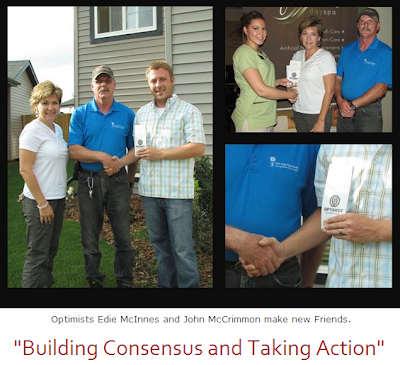 Because Edie McInnes, John McCrimmon and Heather Osborne of the Blackfalds Optimist Club in Alberta, Canada chose to be "in the arena," they made it happen and made twenty new Friends along the way.

Population: 6,000
When Edie McInnes heard about the success of the Greenfield, Iowa Optimist Club's efforts to take-on Optimist International President Danny Rodgers's challenge to recruit twenty Friends of Optimists between July 1st and September 30th in their town of 2,000 people, she felt compelled to make it happen in her town of 6,000.
Edie had self-doubt, but that self-doubt turned into inspiration. She thought, "well, I can probably get quite a few, and I could get a few of our Members to help out." The Blackfalds Optimist Club had a party on Edie's deck.  "We just started brainstorming," says Edie. Within days they talked to the President of the Chamber of Commerce. Within hours an email was distributed to Chamber Members. Within minutes Edie recieved a direct response from Denise Nielsen. That same day, Edie faxed Denise the Friend of Optimists application and Denise joined.
Remove the pressure, and it makes it easier for Optimists to ask and for the potential Friend to say, "yes."
Heather's story
Heather Osborne is a longtime Member of the Blackfalds Optimist Club. She says, "I've overcome a lot of small issues within me by being an Optimist Member. So this is just another little challenge along the way." With the tenacity "To think only of the best, to work only for the best, and to expect only the best," there's no doubt why new Friend Denise Nielsen says, "If these guys need anymore help, get a hold of me."

Twenty Friends in Two Weeks -- IT CAN BE DONE
Optimist John McCrimmon says, "I know I had my Chiropractor appointment this morning, and I was talking to the ladies in the office about it." Chiropractor, Doctor, Dentist, Superintendent, Teacher, Firefighter, Mom, Dad, Neighbor, Brother-in-Law, Sister-in-Law and Friends...all of these people can be part of your  Twenty Friends.