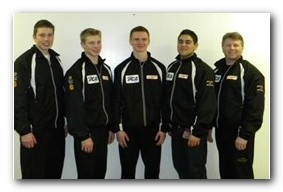 Representing Alberta, team Vavrek of the Dawson Creek Curling Club is the 2011 Optimist International U18 Curling Champions. Top curling teams under 18 years of age from across Canada, the United States and Japan participated in the Championships that were held in Ontario, March 31 – April 4.

After completing the round robin portion of play with a record of 4 wins and 1 loss, the Alberta team advanced to face Washington in the semi-final. A five-ender secured the victory and a date with Ontario in the final.

The final was a close. The Alberta team entered the 8th and final end down 2 points with the hammer. When the last rock attempt at freeze by Ontario chipped off and sat open, Vavrek had an open hit for 5 and the win by a score of 7 - 4.