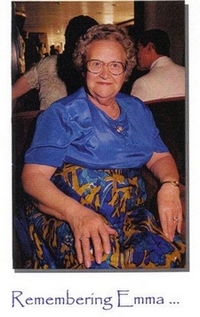 It is with a great deal of sadness that I report to you that Emma Collins passed away this morning.

Emma came into our club through the Saturday Mornings Communications Club, now known as the Brailtone College Club, and worked as a mentor in the project until her health put a halt to it. She worked hard on our Board of Directors and served as President of our club, and helped out with the Oratoricals program when she could.

Emma also was very active in the Toastmaster Organization and belonged to several of those clubs as well and was a Past Governor as well as President of several Toastmaster Clubs. There is an advanced Toastmasters Club named after her at the U of A where she worked before retiring.

Email ThisBlogThis!Share to TwitterShare to FacebookShare to Pinterest
Labels: In Memorium